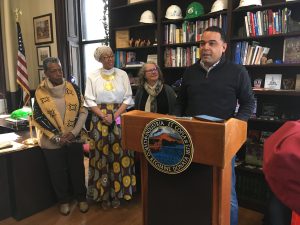 HOLYOKE — During a ceremony held in his office on Wednesday, Mayor Joshua A. Garcia proclaimed December 26 through January 1 “Kwanzaa Week.”

The occasion was a ceremony marking the annual observance of Kwanzaa, an African-American celebration based on African harvest festivals. The word “Kwanzaa” translates to “first fruits of the harvest” in Swahili.

Kwanzaa was created in 1966 by Dr. Maulana Karenga in the midst of the Black Freedom Movement and in the wake of the assassination of Malcom X and the Watts Revolt.

The December 28 event in the Mayor’s Office was moderated by Ayanna Crawford on behalf of the Kwanzaa Collective. She introduced those present to several of the concepts and values Kwanzaa celebrates, including “Ujima,” (collective work and responsibility).

Theresa Cooper-Gordon of Holyoke, in her remarks, explored “Kujichagulia,” (self-determination) and other principles affirmed during Kwanzaa and all year. Other speakers included State Representative Pat Duffy and Mayor Garcia.

The speakers concluded the affirmation of pride and high purpose by lighting the first three candles of the kinara. Each candle represents one of the seven principles affirmed during Kwanzaa: unity, self-determination, collective responsibility, cooperative economics, purpose, creativity, and faith.