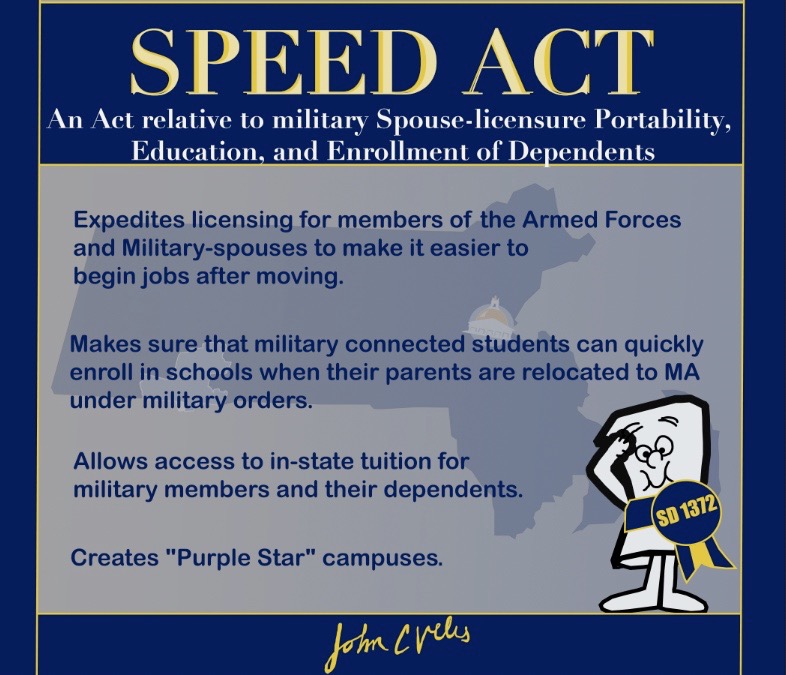 The following was retrieved from https://senatorjohnvelis.com/massachusetts-legislature-passes-bill-supporting-veterans-and-military-families/

(BOSTON–07/29/2022) The Massachusetts Legislature today passed comprehensive legislation, An Act relative to military spouse-licensure portability, education and enrollment of dependents, addressing the Commonwealth’s most immediate needs in the veteran community and making necessary updates to service member quality-of-life issues and acknowledgements of our military branches and individual service, including supporting military families who relocate to the Commonwealth with expedited licensure and school enrollment, creating education awareness programs, and establishing the Massachusetts Medal of Fidelity.

“This is a historic bill. This is most likely the most encompassing military and veterans bill passed in the Commonwealth in the last century,” said Major General Gary W. Keefe, Adjutant General of the Massachusetts National Guard. “This bill recognizes both the sacrifice of our military service members, as well as veterans and their families, and it establishes programs that will recruit and retain service members, attract future military missions, and continue to provide for our growing veteran population. Our thanks to all the Massachusetts legislators in the House and the Senate, as well as the tenacity and leadership of the Joint Committee on Military and Veterans’ Affairs who worked tirelessly to get this bill over the goal line. This bill will make it clear to every state in the republic that Massachusetts is unmatched in its care and support of its military members, veterans, and their families.”

“The SPEED Act is a momentous piece of legislation that that will improve the lives of every single service-member, veteran, and military family member who resides in our state, now and in the future,” said Senator John C. Velis (D-Westfield), the Senate Chair of the Joint Committee on Veterans and Federal Affairs. “The legislation supports our military families in their transition to Massachusetts, introduces new benefits and services for veterans and National Guard members, and expands the ways our Commonwealth recognizes the sacrifices of those who have served. This is an omnibus bill that is truly built off of the work of so many members of the Legislature. I am grateful to Senate President Spilka for her leadership and to all my colleagues for their commitment to getting this bill to the Governor’s desk.”

“Our veterans are the best and bravest among us, and while we can never truly repay them for their service to this country, veterans are more than deserving of continued support from those in public office,” said House Speaker Ronald J. Mariano (D-Quincy). “I’m proud that today, with the best interest of our veterans in mind, the Legislature passed legislation that responds to immediate needs in the veteran community such as access to school enrollment for military families that have recently relocated to Massachusetts, and that establishes health education awareness programs and additional acknowledgements of military service, among other provisions. I want to thank Chair McMurtry and each member of the conference committee, my colleagues in the House, as well as Senate President Spilka and our partners in the Senate for prioritizing the well-being of our veterans, and for the hard work required to get this done.”

“Supporting our brave service members who call Massachusetts home means lifting up the families who stand behind them,” stated Senate President Karen E. Spilka (D-Ashland). “This bill eliminates barriers which make it difficult for military spouses to gain employment despite holding a valid license or certificate, strengthens educational supports for the children of service members who relocate to the Commonwealth, provides greater protections for those who may have been exposed to burn pits, and creates the National Guard Family Education Program as well as a valuable mentoring program for veterans in higher education. I want to thank Senator Velis and his fellow conferees Senators Cronin and Fattman for their hard work on this bill, my colleagues in the Senate, Speaker Mariano and our partners in the House, and military families across Massachusetts for their contributions to our Commonwealth and sacrifices for our country.”

Highlights of the legislation include:

Military spouse licensure portability: requires the Division of Occupational Licensure, the Department of Public Health, and Massachusetts Boards of Registration to accept a military spouse’s application for licensure or notify them of what criteria they were not able to meet within 30 days of the application.

School enrollment for military children: allows military families to register and enroll in a school district when a service member first receives their relocation order, waiving the proof of residency requirement at the time of registration. This provision also allows military children who are transferring mid-semester to enroll in and attend one of the Commonwealth’s virtual schools.

Purple Star campus designation: establishes the Purple Star Campus Program, to be administered by the Department of Elementary and Secondary Education, to designate schools that demonstrate a commitment to students and families of service members.

In-state tuition continuity for military-connected college students: ensures that a member of the military stationed in the Commonwealth, their spouse, or their children are deemed an in-state resident after their acceptance at one of the state’s higher education institutions.

Deborah Sampson Memorial Commission: establishes a commission to determine a location and create a memorial for Deborah Sampson, a Massachusetts resident who disguised herself as a man in the Continental Army during the American Revolutionary War.

Funeral and burial benefits:  requires funeral directors and their staffs to provide information on burial and funeral benefits for veterans.

This bill builds on multiple actions by the Legislature this session to support our Commonwealth’s veterans. Yesterday, the Massachusetts Legislature passed An Act relative to the governance, structure and care of veterans at the Commonwealth’s veterans’ homes, making key reforms to the governance structure of the state’s veterans’ homes, ensuring that both homes are federally licensed as health care facilities, mandating increased state management, and providing independent oversight and accountability of veterans’ homes management. In May 2021, the Legislature approved a $600 million bond authorization — with $400 million for the construction of an updated Holyoke Veterans’ Home facility and $200 million to increase geographic equity and accessibility for veterans not primarily served by the veterans’ Homes in Chelsea or Holyoke.

Having been passed by the House and Senate, An Act relative to military spouse-licensure portability, education and enrollment of dependents, now goes to Governor Baker for his signature.