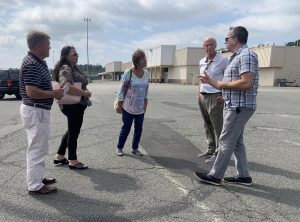 HOLYOKE — City officials, including Councilors Linda Vacon and David Bartley, and members of the City’s Office of Planning and Economic Development (OPED), met Monday at Kmart Plaza to discuss opportunities to boost business at the shopping center. Located on Route 5 at the corner of Northampton Street and Whiting Farms Road, the Kmart store has remained vacant since the once-bustling retailer closed in 2020. That closing came about at the end of a nationwide retreat by Kmart, which found itself unable to compete in a retail market dominated by Walmart, Target, and Amazon.

Ward 5 City Councilor Vacon said she was optimistic after Monday’s discussion. She said she appreciated that the OPED was working in a collaborative fashion with the building owner for the reuse of the Kmart space. Maintaining communication “keeps Holyoke on radar,” she said. Vacon added that it makes “a huge difference to have a mayor who is actively engaged in business
promotion.”

OPED Director Aaron Vega added, “We believe this location is a key area for economic development, with its proximity to residential neighborhoods but also the highway and the Holyoke Ingleside Mall.” Ward 3 Councilor Bartley also was upbeat after the field trip. Bartley said the city needs to engage with not one but three management companies to address retail vacancies at the Route 5 plaza: Kmart, Stop & Shop, and the owner of the former ABC Pizza. He said Monday’s site visit and conversation with OPED staff and Mayor Garcia was “a very necessary first step” in bringing the plaza forward. He said the plaza’s location on Route 5 “checks all the boxes” in terms of proximity to the mall, I-91, and the Turnpike. Garcia noted that the remainder of the shopping plaza is under different ownership and appears very active with a mix of small and large retailers. He said he and OPED staff will continue their dialogue with Transformco and interested parties to redevelop and revive the site.