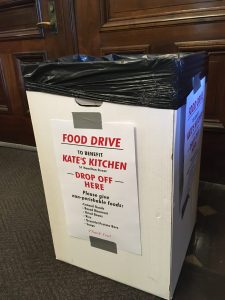 Photo caption: This food drive collection box outside the Holyoke Mayor’s Office is one of four set up in City buildings.

HOLYOKE — The city of Holyoke is holding a food drive to benefit Kate’s Kitchen, one of the charitable services of Providence Ministries at 51 Hamilton Street.

The food drive, which began this week, will continue through the holidays, and conclude on January 6 — Three Kings Day.