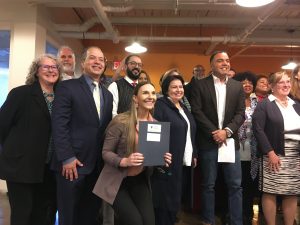 The source of the funds was the Collaborative Workspace Program, a competitive grant program administered through the Community One Stop for Growth. One of the largest grants — $75,000 — will fund the creation of micro-offices, workspaces, meeting rooms and furnishings at the former Armour Works building on Race Street.

Mayor Garcia, who gave opening remarks, applauded “the creation of an innovators’ workspace within the Armour Works … This is a win-win development for the Canal District, Race Street, and all of Holyoke. The Armour Works was once at the center of the city’s wholesale meat trade,” the Mayor said. “The long-dormant Armour Works is back in business, though it is no longer a part of the meatpacking industry. The building that was once a storehouse for beef is about to become a lighthouse for innovation.”

The Collaborative Workspace Program took root after the release of MassDevelopment’s “Maker Spaces” report in 2013 and its launch of the Commonwealth’s Transformative Development Initiative, including the TDI Cowork program in 2014 that made grants available on a pilot basis to spaces located within Gateway Cities.

Now in its seventh round, the Collaborative Workspace Program is part of a larger state strategy being implemented by the Executive Office of Housing & Economic Development (EOHED) to foster community-based innovation and creativity across the state. The current round focused on fit-out grants for collaborative workspaces (of up to $100,000) for building improvements and equipment purchases, and seed grants (of up to $15,000) to aid in feasibility analyses and to support predevelopment costs for early stage spaces. The grants require a one-to-one match. The goal of the Collaborative Workspace Program, run by MassDevelopment, is to accelerate the pace of new business formation, job creation, and entrepreneurial activity in communities by supporting infrastructure that fuels community-based innovation. Different types of spaces include innovation centers, maker spaces, artist spaces, collaborative kitchens, and co-working spaces.