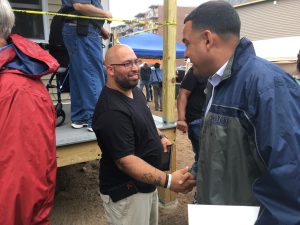 HOLYOKE — Several Holyoke city officials participated in the dedication of two Habitat for Humanity houses at 117 and 113 Jackson Street on July 18.
Also present were the newly minted homeowners — Ireydiza Perez, her husband, Juan Gonzalez, and their two young children, and their new next-door neighbor, Jennifer Rolon, and her three teenage boys.
Construction of the homes began last summer. More than 150 volunteers from local businesses and school groups, as well as the future homeowners, helped with the construction. Greater Springfield Habitat for Humanity initiated and oversaw the project. Habitat makes it possible for low-income families to qualify for decent, affordable housing. In lieu of a down payment, Habitat families invest “sweat equity” hours to help build their own homes, alongside the Habitat construction staff and volunteers from the community. The homes are then sold to the families at no profit and are financed with an affordable mortgage.
Mayor Joshua A. Garcia, Community Development Director Alicia M. Zoeller, Holyoke Housing Authority’s Janara Healy and Community Preservation Act Committee Chair Meagan Magrath-Smith each addressed the gathering, saluting Habitat and all those involved in the construction of the two houses. Zoeller, in her remarks, acknowledged former Interim Mayor Terry Murphy, who was present, for his support of the project.
The dedication closed with a blessing by Isaac Bird.